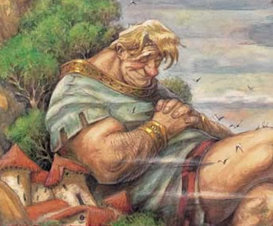 Finn McCoul
Finn McCoul is the greatest champion in all of Ireland, but when he discovers that the brutish giant Cucullin is after him, even the great Finn gets a wee bit nervous. But with some ingenious culinary magic on the part of his clever wife, Finn manages to get out of the scrape with his dignity intact. Well, most of it! This rollicking version of a beloved Celtic legend will light up your eyes and set your feet to dancing.
Themes: Folktales from the European tradition, We All Have Tales, Big and Little