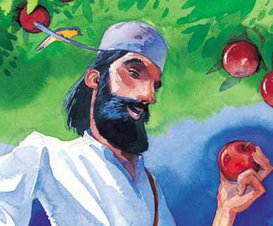 Johnny Appleseed
This is the touching story of the benevolent naturalist who roamed the Ohio valley in the early 1800's, planting apple orchards, making friends, and spreading goodwill along his way. Known to early settlers as a gentle soul with a reverence for all life, Johnny never missed a chance to save an abandoned animal or to savor a delicious apple pie.
Themes: Westward Ho!, American Heroes and Legends