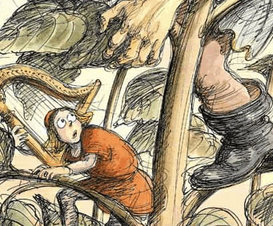 Jack and the Beanstalk
In this comic retelling, young Jack foolishly sells his family's cow for a handful of magical beans. Overnight, they grow into a beanstalk that reaches up beyond the blue sky itself, leading Jack into a hilarious series of misadventures with a dimwitted ogre and his extra-large spouse. This beloved English folktale is nearly as merry and old as England itself.
Themes: We All Have Tales, Big and Little, Folktales from the European tradition